In May 2019, Hungary celebrated 15 years of EU membership. However, the European Parliament believes that Hungary is in breach of EU values, thereby posing a threat to the existence of the union. The fundamental restructuring of the political system initiated by Prime Minister Viktor Orbán and his Fidesz party has had a tangible impact on the functioning of Hungarian democracy, raising concerns and criticism. How will this conflict develop – both with regard to Hungary as an EU member state and with regard to the future of the EU?

Hungary is one of the most successful “new” Member States in addition to Slovenia, Estonia or Poland. In general, Hungary seems to have handled the socio-political transformation towards democracy and market economy after 1989 well. Since 2010, Fidesz has enjoyed great approval in Hungarian society. Viktor Orbán won his third consecutive victory in 2018 and once again secured Fidesz enough seats in the National Assembly to achieve a two-thirds majority.

This means, among other things, that Fidesz can change not only laws but also the constitution of the country. In 2011, the Fidesz Party used this power to adopt and sign a new and controversial fundamental law. For this reason, the Article 7 case against Hungary was opened in September 2018, which may in the extreme case lead to the restriction of EU membership rights.

The current Fidesz government emphasises that their concerns and resistance are not targeting the European Union as such, but rather the ostensible left-liberal political elites in Brussels. In particular, the current Hungarian government is suspicious of the ideas of multiculturalism and the enforced federalism of the EU, instead advocating traditional values and a Europe of strong nation-states . In her policy paper, Maria Skora reveals what the EU can do to bring back a pro-European course in Hungary. 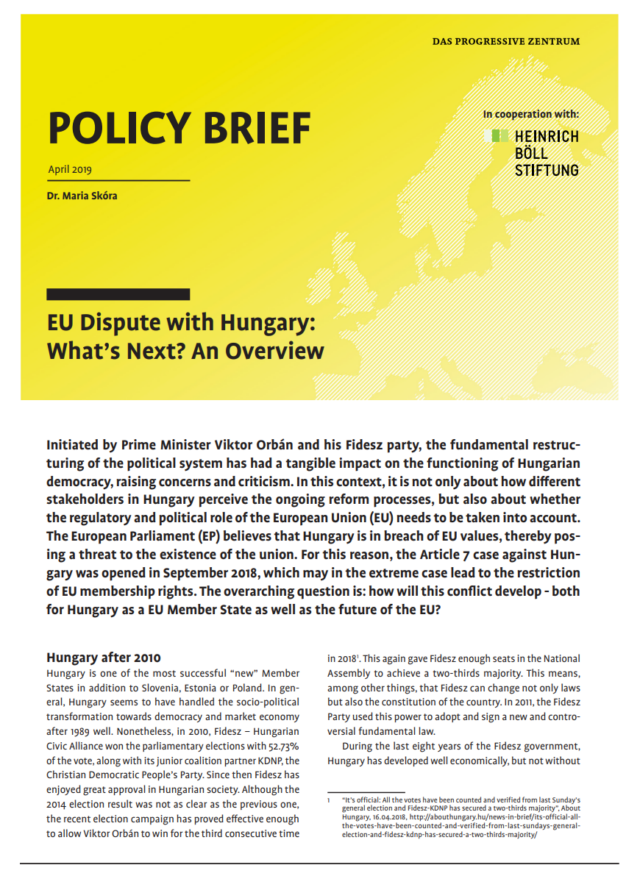