This Discussion Paper takes a closer look at the current challenges of the European foreign policy vis-à-vis Russia and sketches a vision for a new generation of Ostpolitik, aiming at organizing European unity as well as strengthening the EU’s strategic alliances in Eastern Europe and across the Atlantic.

Inspired by the 50th anniversary of Willy Brandt’s historical gesture in Warsaw, the so-called “Warsaw genuflection”, we reflect upon the principles of his original strategy towards the Eastern Bloc. Which of these principles could guide us today in search of a new progressive Ostpolitik? We recognize that the world has significantly changed: the “Cold War” and the ideological rivalry between Russia and the United States has passed. Today, we live in a far more fragmented political reality, with new challenges, such as cyber warfare. Looking at what is happening inside the EU, just outside of its borders and with regards to a new reality in transatlantic relations, one thing is clear: the need for a new generation of Ostpolitik.

The complexity of today’s situation should not discourage us from thinking bold. We advocate for “daring more democracy” in shaping Europe’s Eastern policy, both when it comes to defending values as well as engaging more with society. In other words: being ambitious, but not naive. The task is to combine the value-driven approach with progressive pragmatism.

In particular, we call for:

The underlying principle of the new Ostpolitik should be that it is not exclusively a German project but a European initiative, with equal engagement of all member states as well as inclusion of the EU’s Eastern neighbourhood. Eastern policy cannot be developed in a void: it needs to be embedded into the framework of existing alliances and neighbourhood policies and a broader consensus of all EU states is required. The next Ostpolitik must be a European one.

In 2020, we celebrated the 50th anniversary of Willy Brandt’s historical gesture in Warsaw, a symbol of reconciliation and dialogue between the East and the West. This publication draws upon the main arguments and conclusions met during an international roundtable held online, on December 8th, 2020, debating the heritage of Brandt’s Ostpolitik. The event hosted Aleksander Kwaśniewski, the former President of Poland; Kati Piri, MEP and Member of the Committee on Foreign Affairs; Max Bergmann, Senior Fellow, Center for American Progress and Liana Fix, Head of International Politics, Körber-Stiftung. This paper was inspired by that lively debate.

EU Dispute with Hungary: What’s Next?

This is a joint publication of 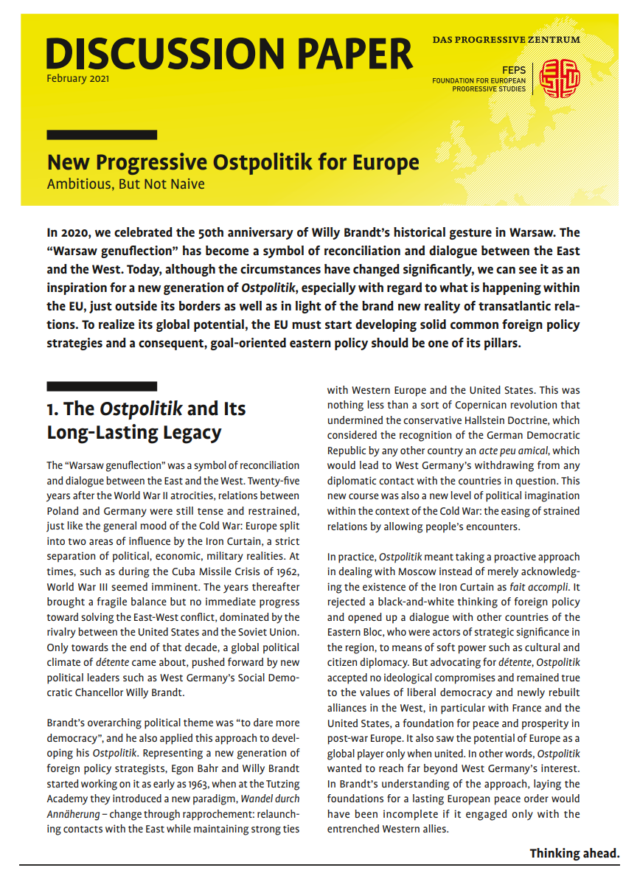