The Democracy Lab, a project launched in April 2017 within “Das Progressive Zentrum”, presents its first Discussion Paper. It focuses on the reasons why we need better democratic institutions, more flexible and agile processes, and new mental models to adapt our democratic system to the current challenges of the 21st century. The paper essentially calls for a debate on the architecture of liberal democracy.

Author Hanno Burmester, Strategic Lead of the Democracy Lab, argues that the core problem of our democracies today lies in its inability to effectively respond to the ongoing changes in the political, social, and economic environments that democracies are confronted with today. The political field is therefore caught in an hysteresis effect – people and social systems doing what they usually do, despite the outside environment asking for different actions. In effect, the way parties organise their assemblies, how ministries work, and how parliaments deliberate, resembles the 1960s rather than the year 2017.

The discussion paper makes the case for a revitalisation of our current democratic systems and for a debate on the architecture of liberal democracies. The paper motivates for not replicating current models of thinking but to inject democracies with innovative ideas by experimenting with a higher frequency, and, more importantly, cultivating a mindset that cherishes the imperfect.

The aim of this first Discussion Paper is to kick off a process of co-creation within the Democracy Lab that challenges and improves democratic reform. 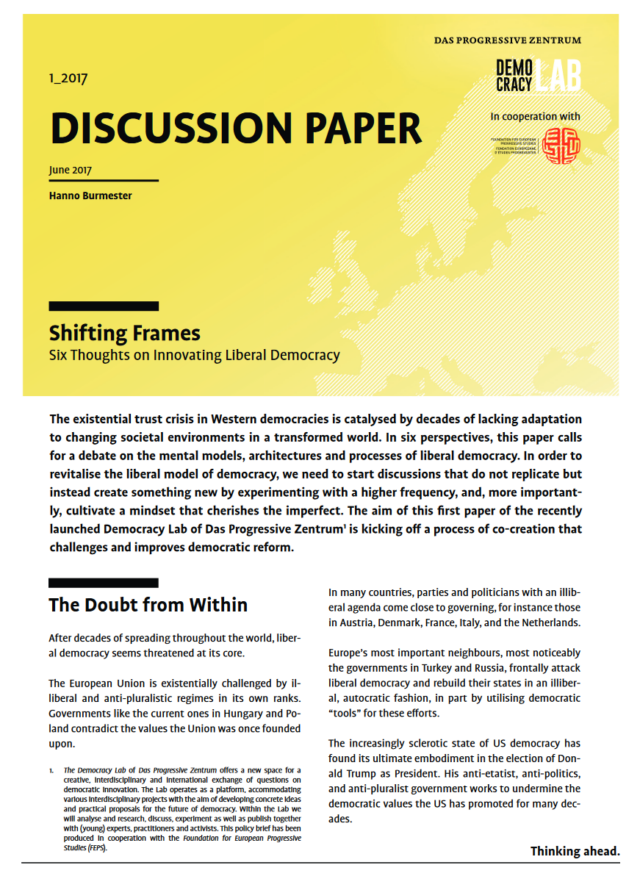