In this discussion paper, Hanno Burmester explores the current crisis of our political system and challenges established perspectives on democracy. He argues that what it takes to both solve the crises and revitalise democracy is the re-definition of a 21st-century democratic purpose and a radical, transformative approach to politics.

Liberal democracy experiences multiple crises that are potentially fatal: an ecological crisis, a social crisis and an institutional crisis.

While some fervently defend the current democratic model, others are discontented and frustrated by challenged identities, economic inequalities or a lack of perspectives, and turn their back on what they feel are empty promises and ideals of democracy.

In this Discussion Paper, Hanno Burmester, Policy Fellow at Das Progressiven Zentrum, brings in a new analysis on the status quo and offers new ideas on the purpose of liberal democracy.

The overarching hypothesis of his seven sketches is that only if we manage to re-inject democracy with a purpose that fits today’s and tomorrow’s systemic needs, we will be able to strengthen the public trust in democracy and achieve the reintegration of democratic societies into the boundaries of the ecosystem. 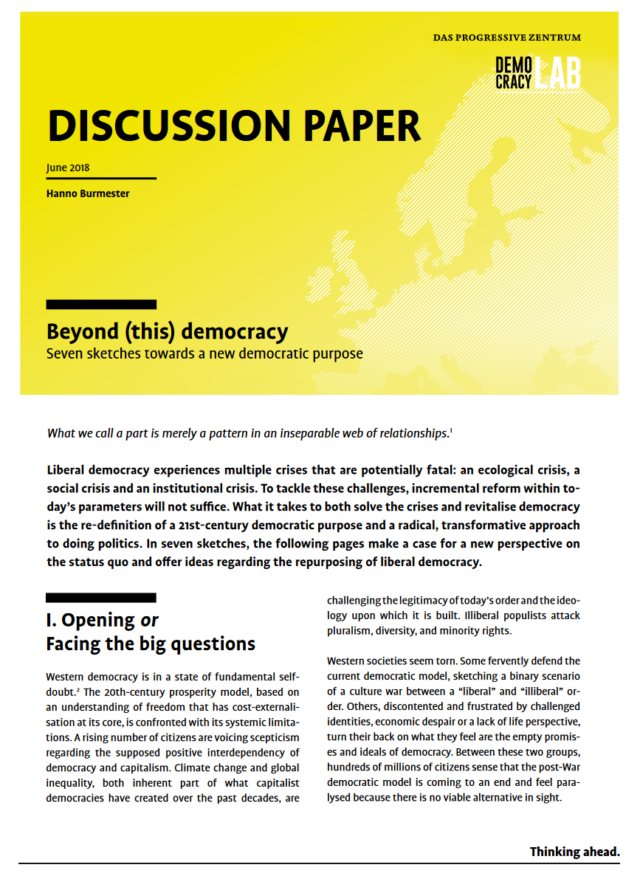