2020 started with the urgent challenges of mitigating climate change, soothing disaffection with democracy, and easing anxiety about jobs disappearing due to technological progress. Little did we know all these concerns would only become more pronounced with the emergence of the global pandemic of COVID19, affecting all, but not everybody equally.

Alongside every other nation in the world, both Germany and the United States have to deal with the challenges described. In a multilateral world, where cooperation is a key to success, these common difficulties can only be overcome by exchanging best practices and building enough political will and trust in order to tackle them together.

We believe that cities and metropolitan areas play an ever more important role in sustaining and further developing the close historical, cultural, economic and political ties between the United States and Germany.

This working paper was written based on the results of two conferences held in 2020 in the United States and Germany, focusing on the most pressing issues ahead of cities today when it comes to inclusive growth, sustainability, democratic governance. We want to reflect upon the challenges that cities and metropolitan areas in both countries are facing today, look beyond their local level activity and identify these urban spaces as internationally relevant actors, capable of not only tackling global challenges at the local level but also strengthening the transatlantic alliance from the bottom up.

This working paper sets the scene for further activities within the New Urban Progress project, bringing together German and U.S. perspectives in a spirit of mutual understanding and the pursuit of a common goal: making German and U.S. cities transatlantic changemakers and trendsetters for a more prosperous future.

New Urban Progress is the joint metro initiative of Das Progressive Zentrum, Alfred Herrhausen Gesellschaft and the Progressive Policy Institute. The project is supported by the Transatlantic Program of the Federal Republic of Germany and funded by the European Recovery Program (ERP) of the Federal Ministry of Economics and Energy (BMWi). 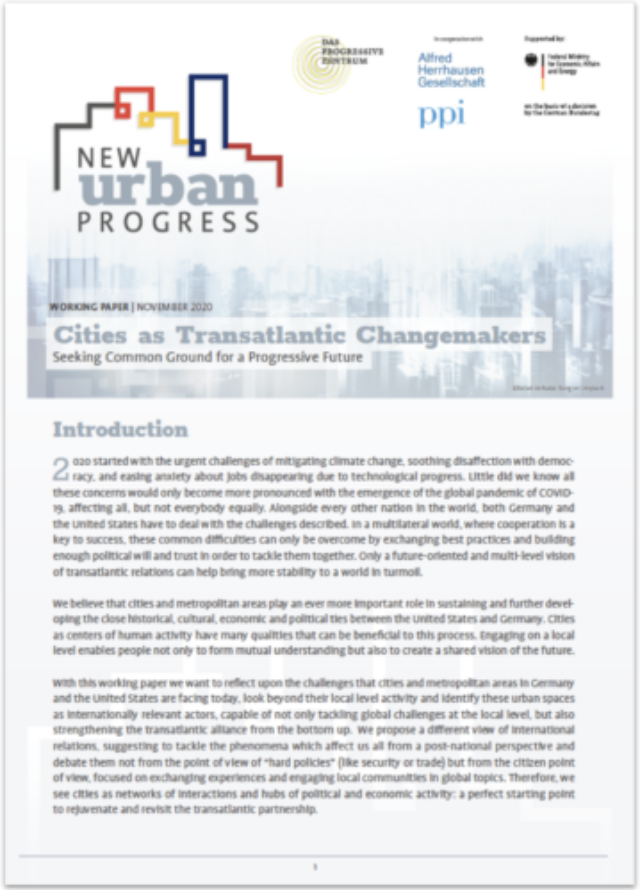