The populist surge seems inextricably linked to the logic, workings, and structural transformation of the public sphere. Hence, in order to understand and counter the current fundamental attacks on our liberal democracies and pluralist-democratic values, we need to address a number of crucial questions in this regard. For example, how does the transformation and diversification of the media affect populism as well as feasible responses? And how should political and media actors deal with populists without either playing into the narrative of the „ignored outsider“ or giving them more attention than warranted by their political successes?

To debate these issues, Das Progressive Zentrum organised an exclusive, international roundtable. It brought together representatives from the media, politics and academia from different European countries.

We were honoured to hear insights from the following distinguished speakers: 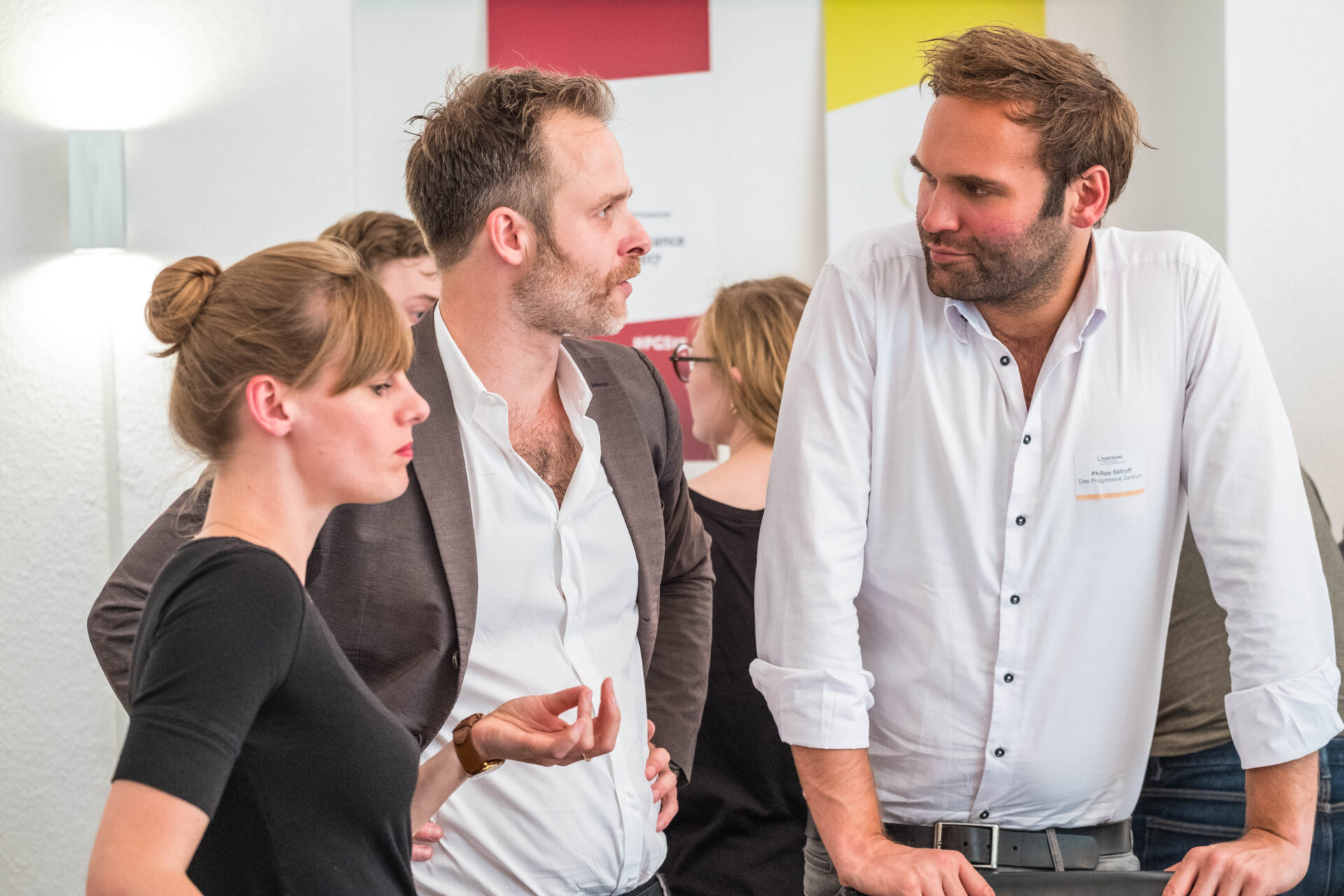 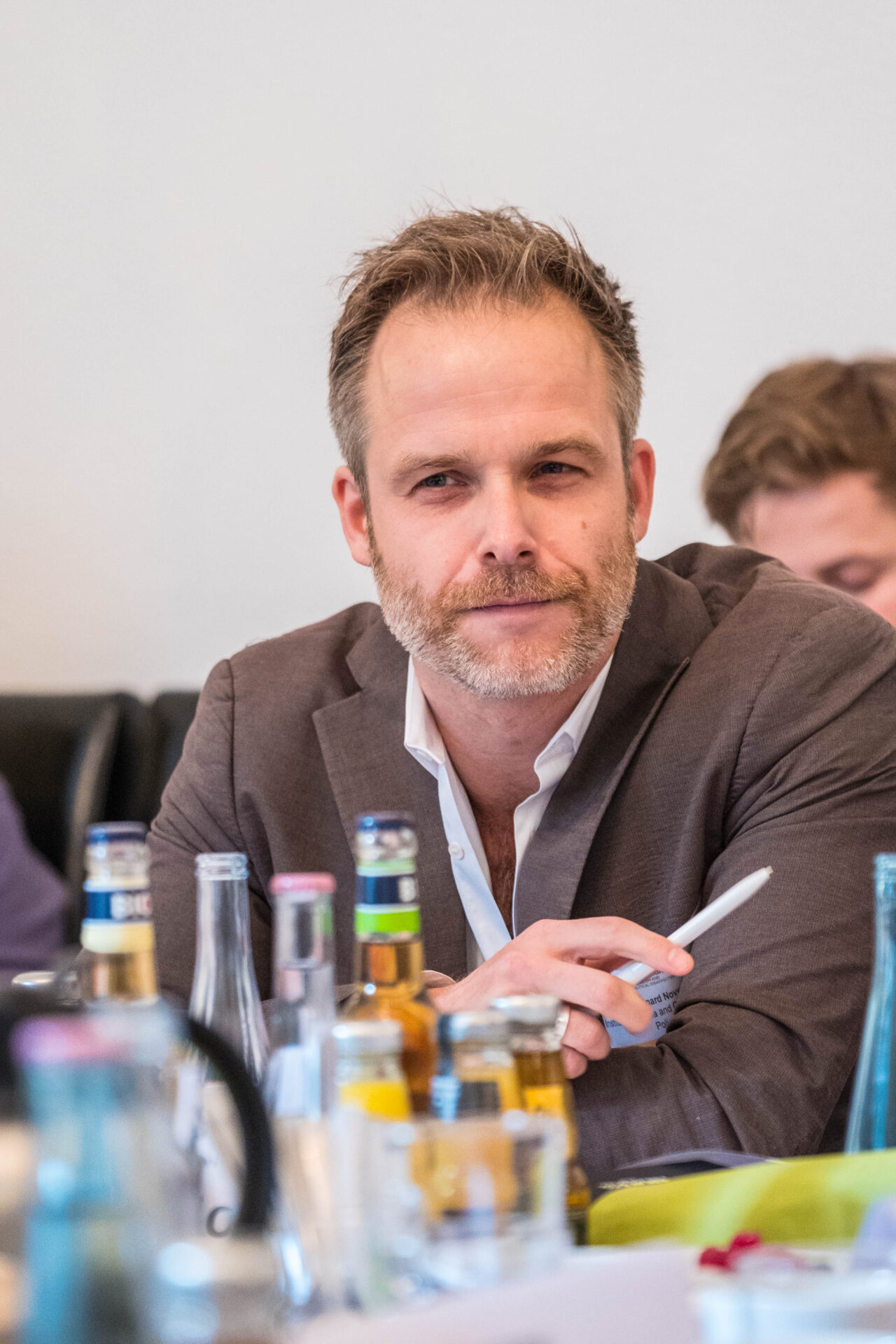 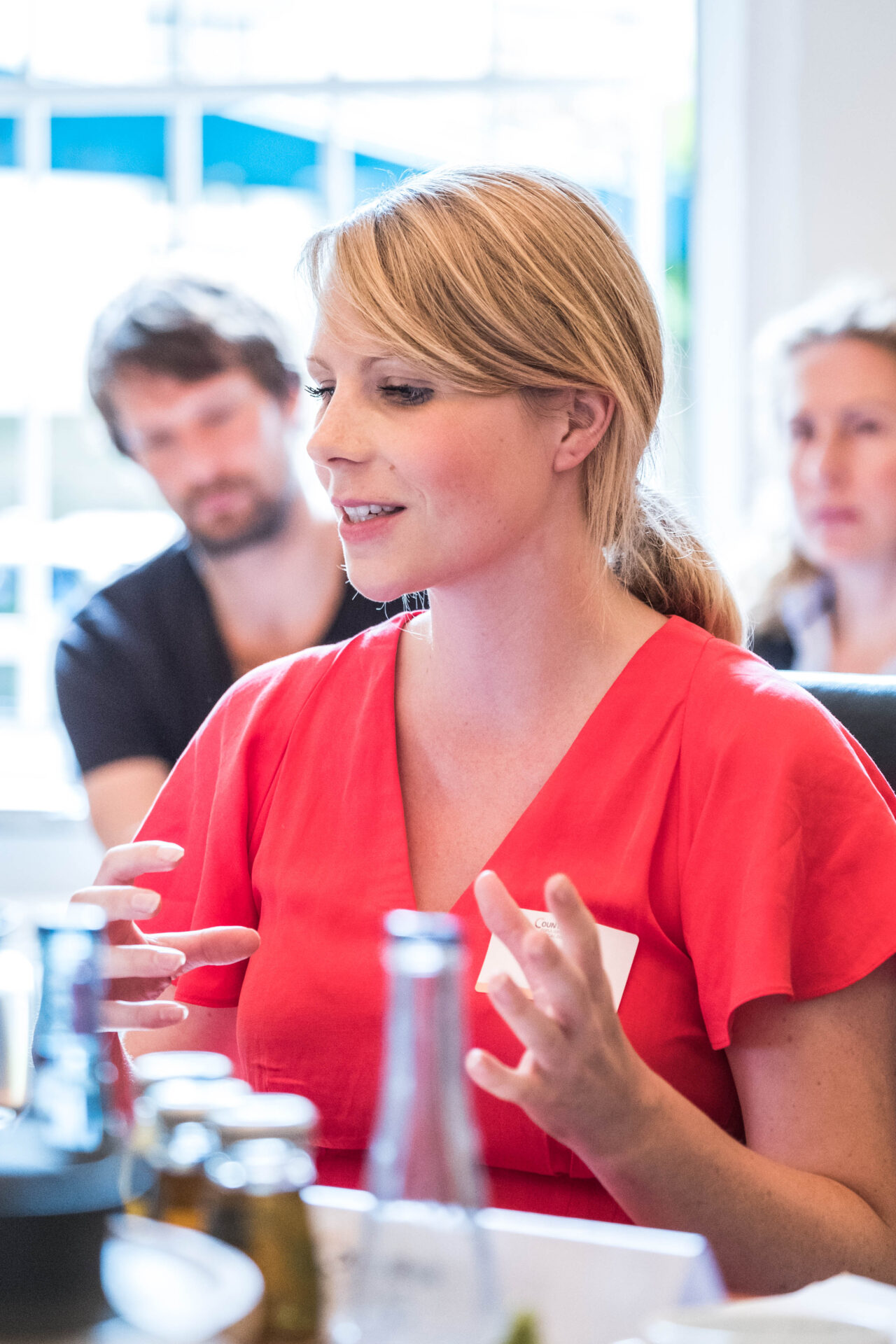 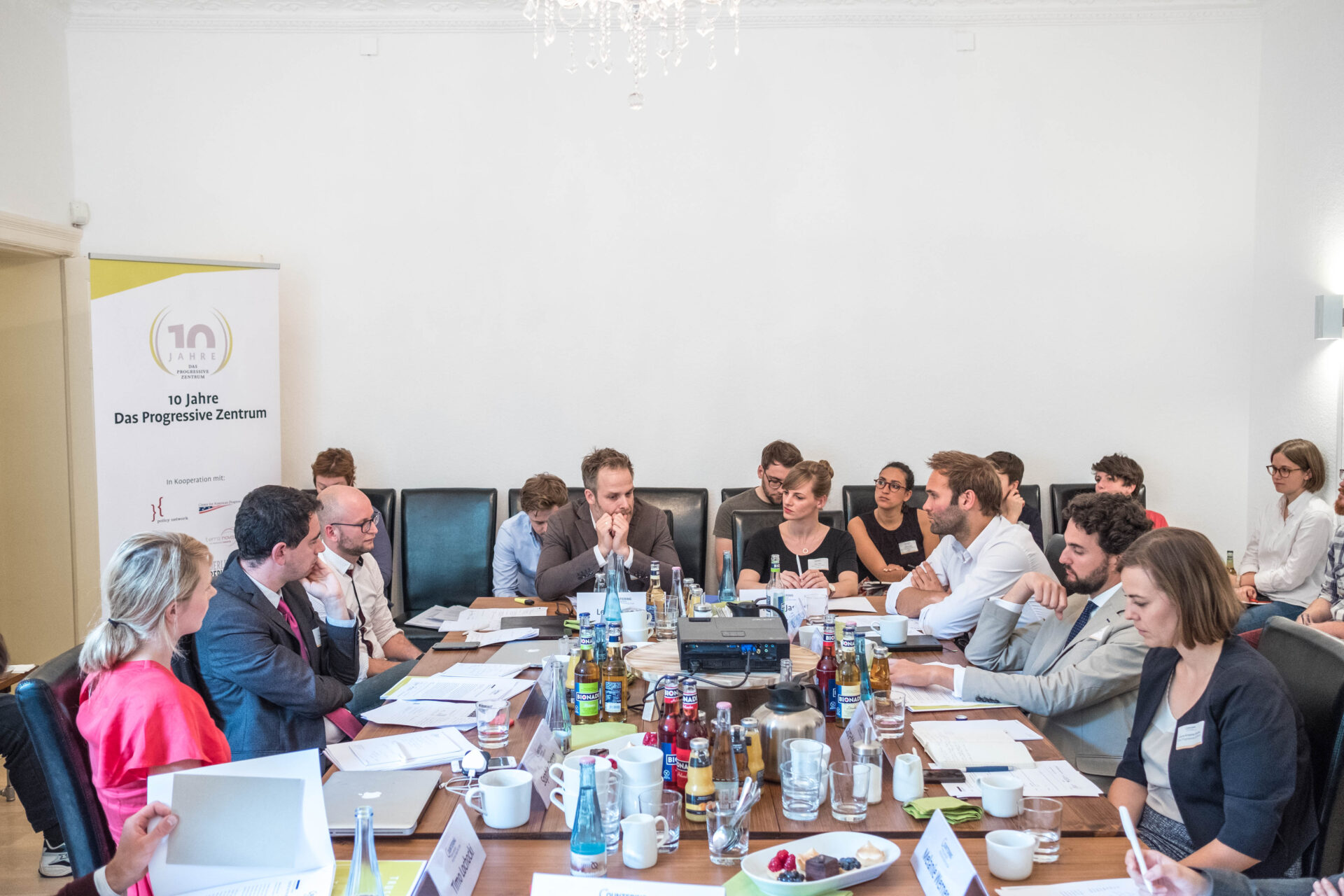 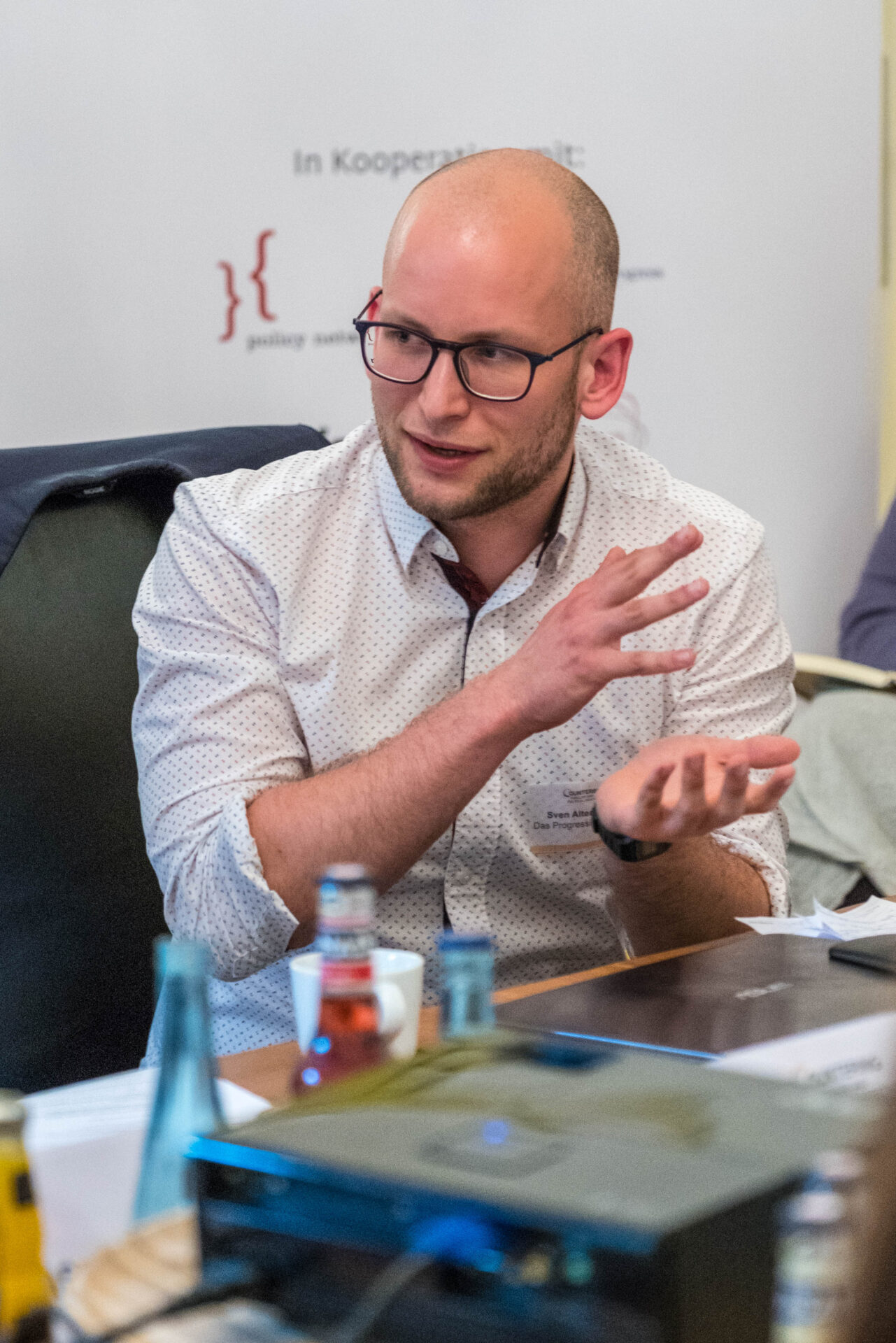 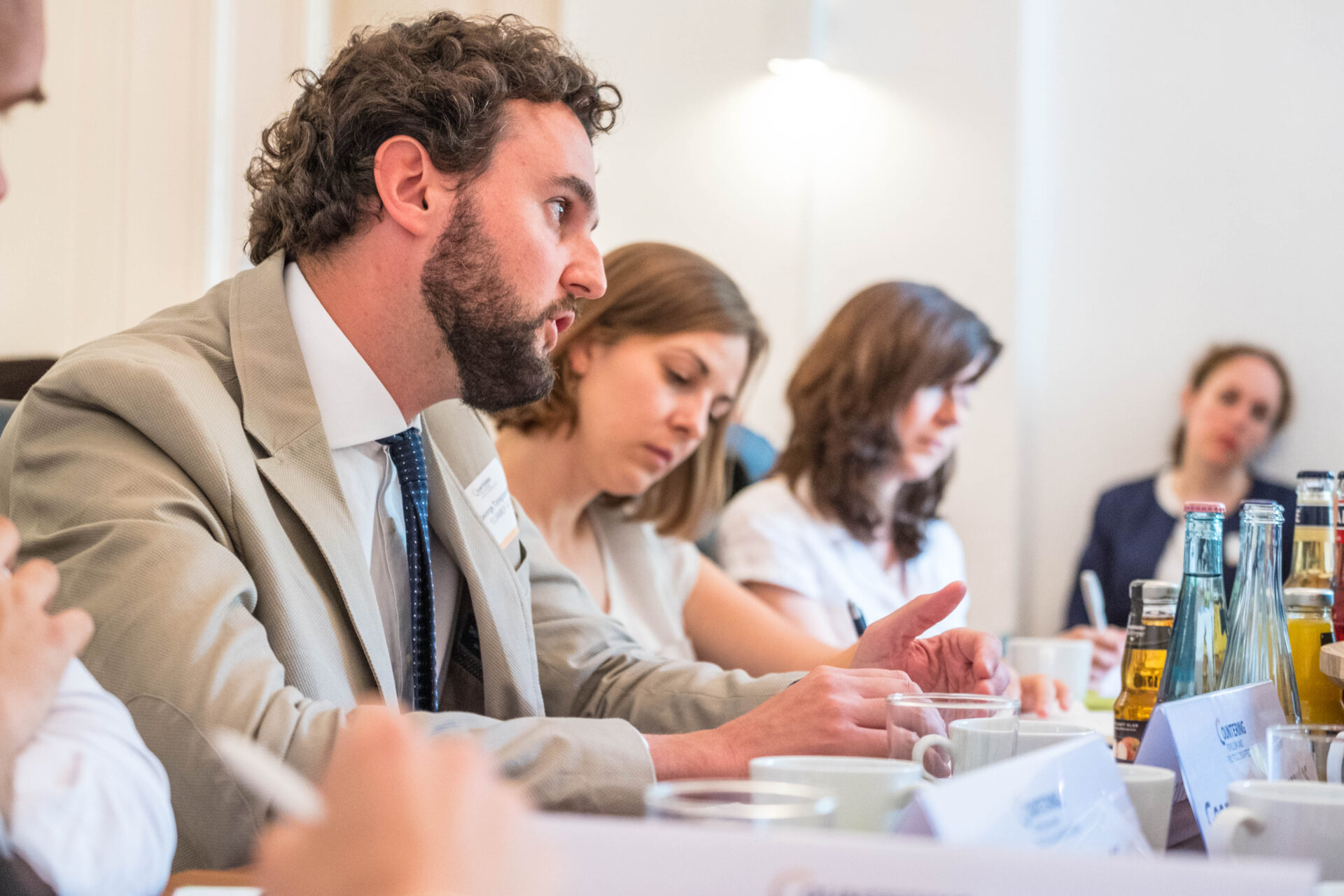 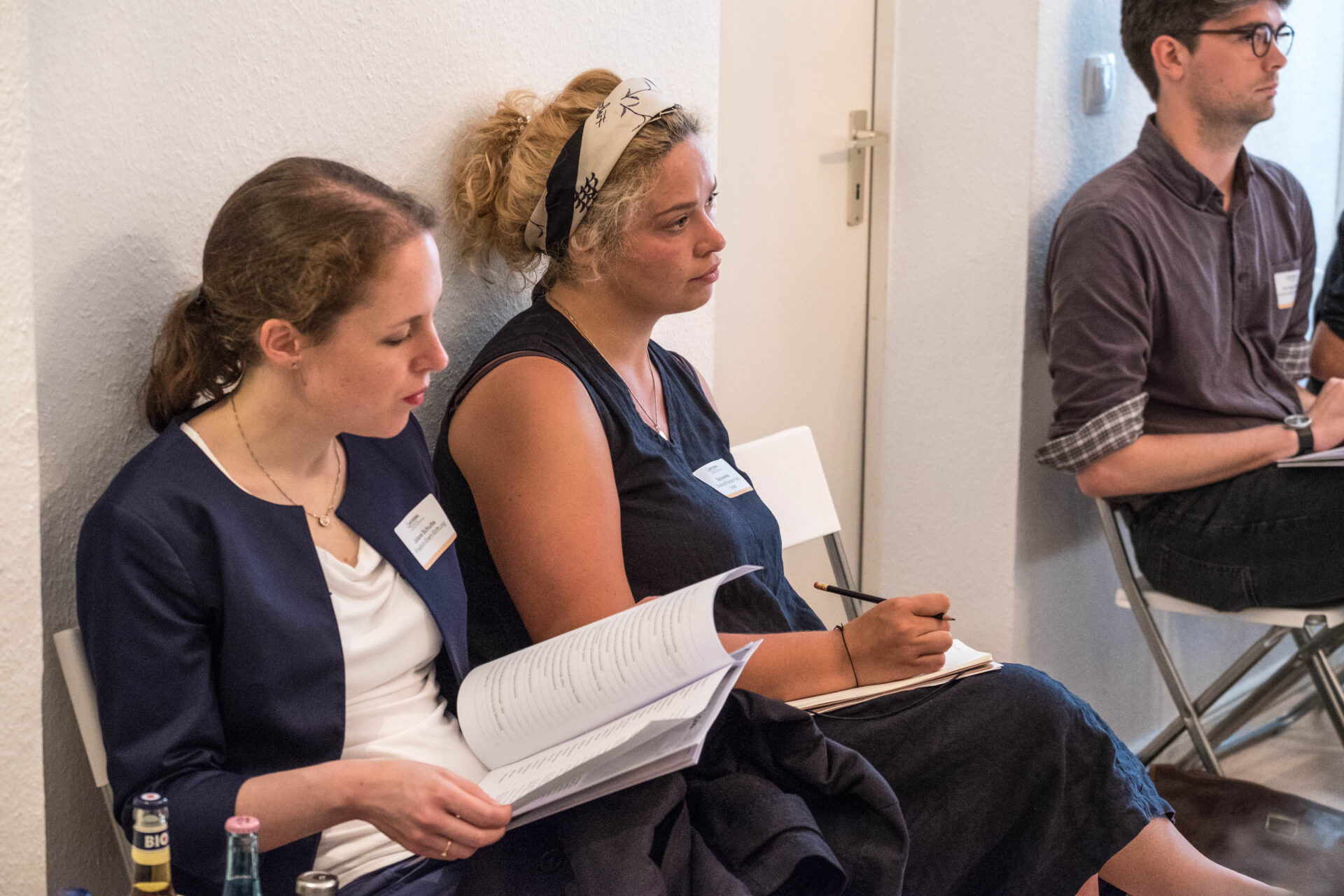 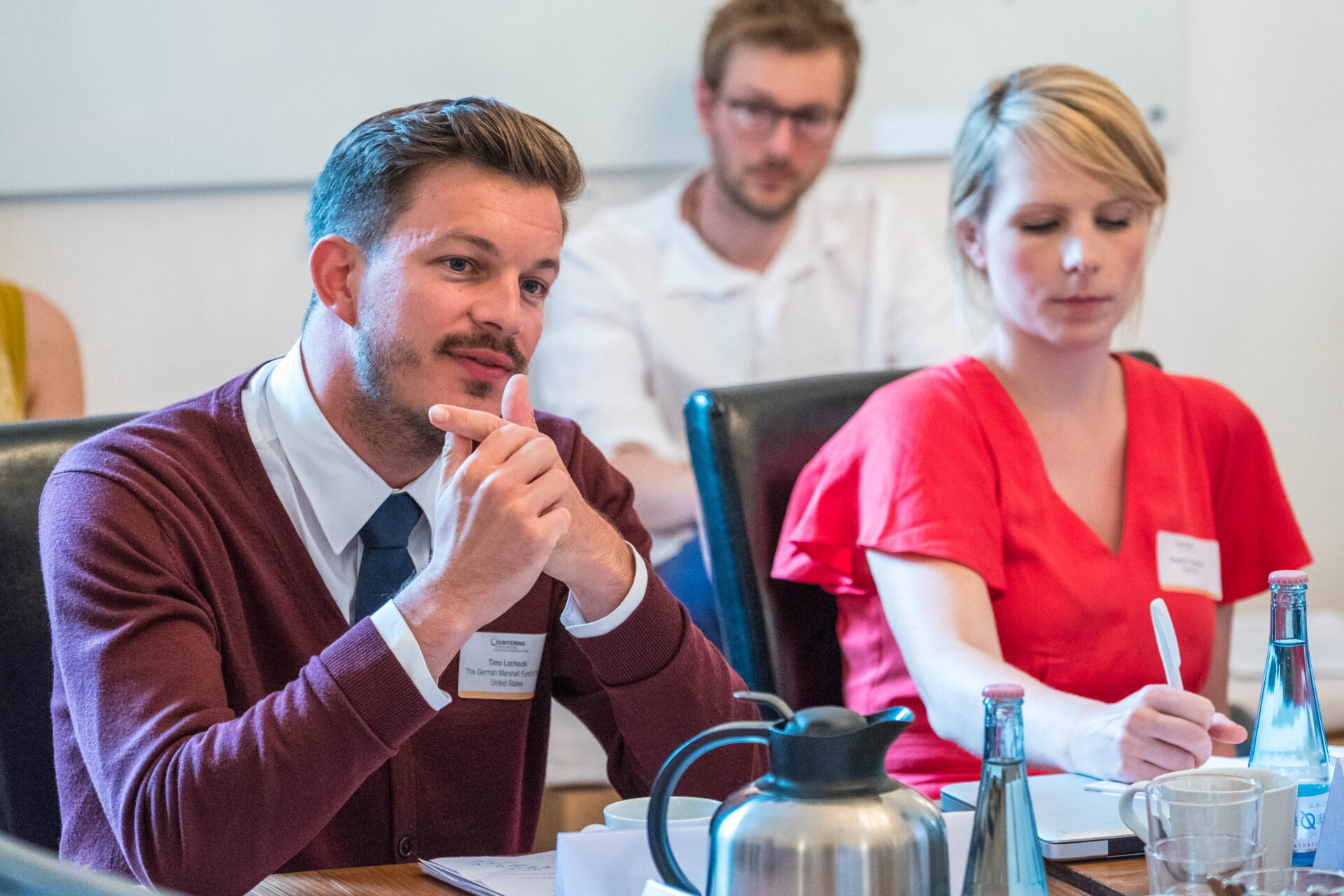 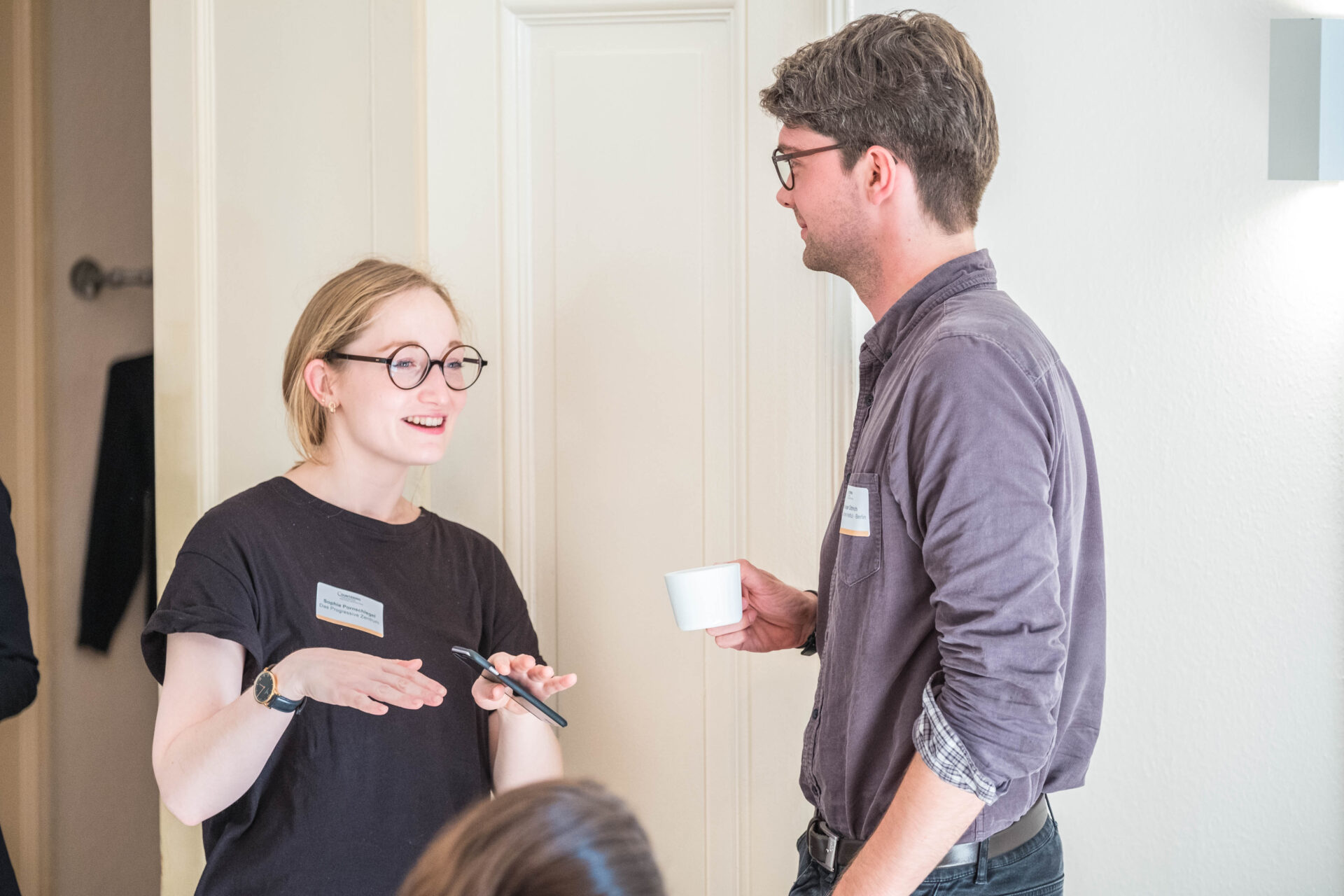 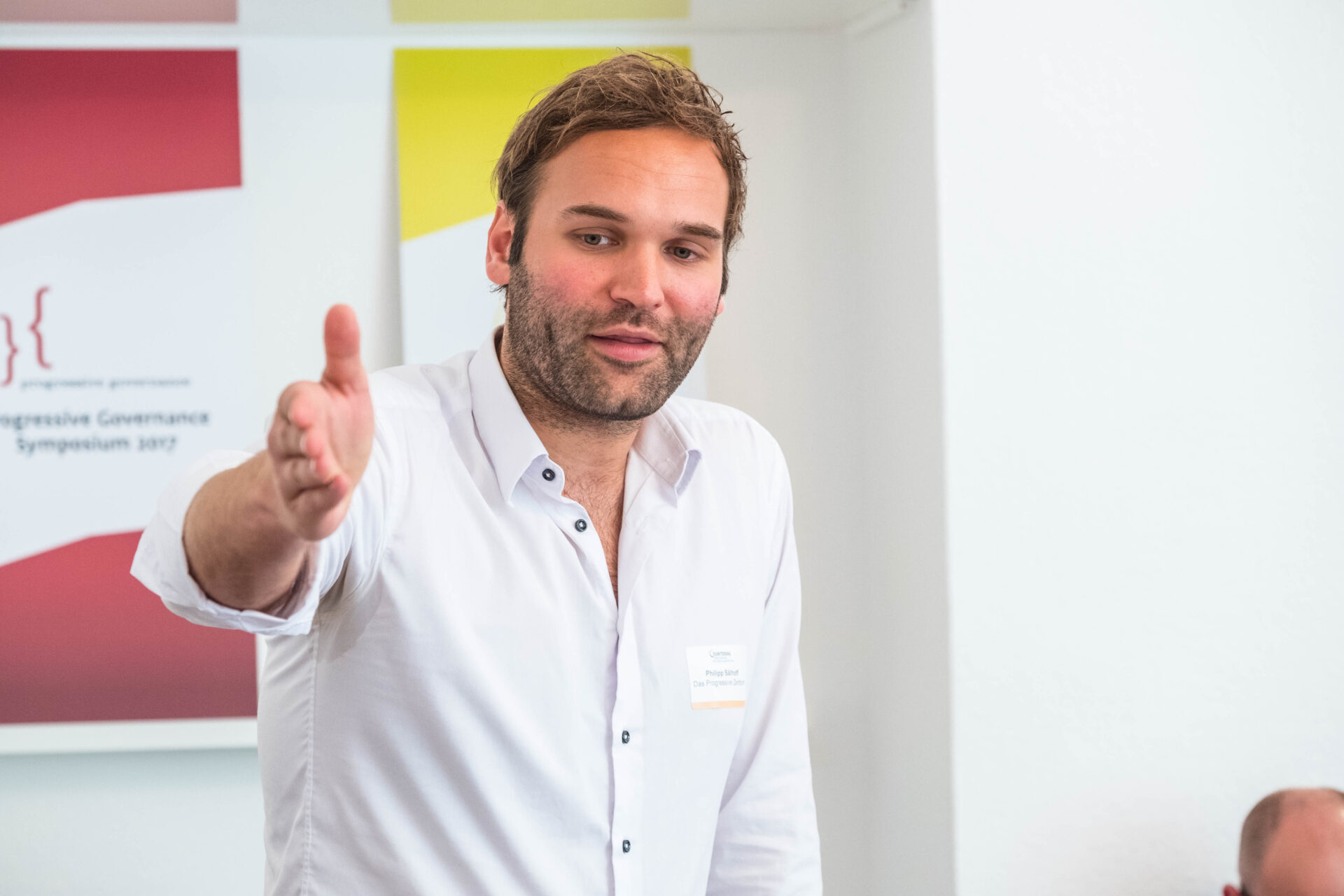 After a few welcoming remarks from Philipp Sälhoff, Head of the Programme ‚International Relations‘ at Das Progressive Zentrum and Romy Jaster, Trainer at the Institute for Argumentation Competence, the roundtable opened with a discussion on the transformation of the public sphere and populism. Leonard Novy, Director of the Institute for Media and Communication Policy, highlighted the fact that the rise of populism is embedded in – and partly fueled by – the more fundamental process of a structural transformation of the public sphere. Novy emphasised the need to focus on the relationship between societal and technological change. He stressed the need for greater algorithmic transparency in the sphere of social media and argued that news literacy skills, alongside a better understanding of social media systems are needed, which would then enable readers to identify ‚fake news‘ more easily. However, what is needed above all is a broad public debate on the on-going structural transformation and the value of journalism in digital times.

Sophie Gaston, Head of International Projects and External Affairs, Demos, spoke on how the power dynamics between the media, politicians, and citizens are being altered by populism. Gaston explained how the media, traditionally a platform which mirrored society and whose role it was to educate and inform, is no longer able to hold politicians to account as populist politicians thrive on both good and bad publicity. Gaston pointed out that although politicians often wished for a larger voter turnout, it now poses a problem as the newly mobilised voters are not more educated regarding politics than they were previously. Gaston concluded by claiming that news gathering conventions need to be revisited and examined if they are still fit for purpose in today’s media landscape.

The roundtable’s second session focused on the Greek and Hungarian experiences concerning the relationship between populism and the media. George Tzogopoulos, Research Fellow at the Hellenic Foundation for European and Foreign Policy and at the Centre International de Formation Européenne, opened the session. He explained how the corruption triangle between Greek banks, the media, and politicians has led to a mistrust of mainstream Greek media by the citizens who tend to do the opposite to what the media advises. Online media is seen as an alternative to the mistrusted traditional media outlets. Tzogopoulos claimed that the media was also responsible for giving the once unknown Golden Dawn, Greek’s extreme right-wing party, unwarranted media coverage, which in turn gave them a stronger voice and increased their popularity.

This input was followed by a presentation from Tamás Boros, Co-Director at Policy Solutions. With a focus on the role of alternative media networks, Boros explained how Jobbik, Hungary’s right-wing party, gained popularity and ultimately a large proportion of the votes without being covered by the mainstream media. Boros also focused on how Fidesz, a once mainstream party, has evolved whilst in power into a populist extremist party, which has introduced new media laws and a centralised media regulation body comprised of people loyal to the governing party.

The third session debated possible strategies against populism in the public sphere. Timo Lochocki, Transatlantic Fellow at The German Marshall Fund of the United States, explained what he believes to be the conditions under which populism thrives, namely the presence of a perceived threat, a subsequent disappointing reaction from politicians, and the existence of an alternative political option, through which voters can express their anger. Lochocki claimed the media is responsible for depicting certain events as a challenge and communicating failed solutions to the perceived challenge. He expanded upon this by claiming that political solutions deemed as good by the liberal media could influence right-wing voters to perceive these solutions as too liberal and undesirable, thereby inspiring opponents to behave differently.

Maria Exner, Deputy Editor-in-chief of Zeit Online, responded to Timo Lochocki by stating that the media had initially given the Alternative für Deutschland (AfD) too much news coverage, but that they have now learnt not to do this. She emphasised that the core of journalism is to mention problems. Giving the example of Zeit Online’s project ‘Dürfen wir Ihnen jemanden vorstellen?’ (‘Allow us to introduce you to someone’), Exner emphasised the existence amongst citizens of a desire to find common ground. The media gives the impression that there is a larger divide than there really is. Exner claimed that the media could focus on a common ground and make people feel they have more in common with others, rather than making them feel as though a large proportion of society holds extremely different views to their own.

Following a lively discussion in which Exner and Lochocki debated possible ideal media responses to populism, Laura-Kristine Krause, Head of the Programme ‘the Future of Democracy’ at Das Progressive Zentrum, closed the debate with a summary of the roundtable. Romy Jaster moderated the debate for all sessions.

The programme for this event is available here.

The roundtable is part of the project Countering Populism and Political Disaffection, which is supported by the Federal Ministry for Family Affairs, Senior Citizens, Women, and Youth as part of the Federal Programme Demokratie leben! 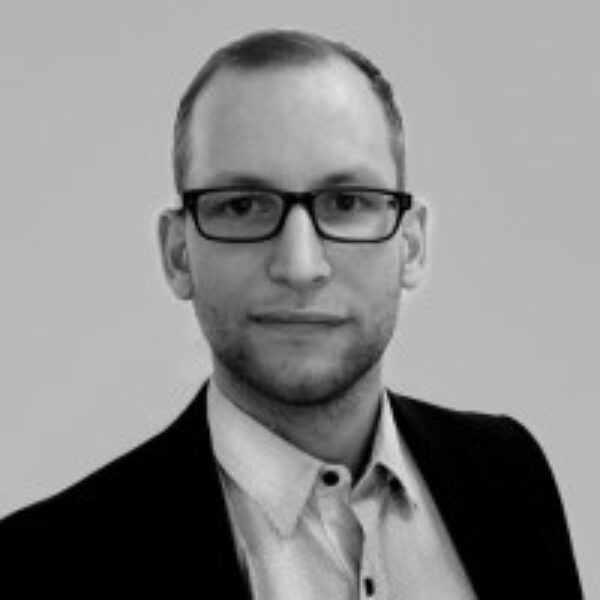 Why our failure to resist Putin enthusiastically will haunt us and how we can overcome it.
Paul Mason
Debate
To the blog
TagsDemokratie, Digitalization, Populismus, Resilient Democracy
share: